Well, apart from last week’s freak groundswell it has been a nastily rare occurrence this year so far. So it was like quite a happy day yesterday as one could feel that the wind was battering the surface of the sea all the way up the channel. 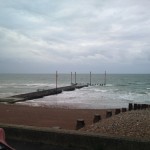 Being Sunday it was not easy pulling myself down to Shoreham’s hotpipe at 6:30AM. Sadly the effort was unrewarded as the tide was still too low and the swell had not built up by then.
So, I spent the day in anticipation.
Toby and I made it down the long run to Carats and parked happy as the machine is currently out of order, in fact it was 5 so it would have been free anyway. Well, the tide way still way too high for us on our longer boards so we took a stroll along towards new beach. There was a band of 5 or six guys on shorties bashing the shorebreak. They were no doubt keeping in shape for better places than here but were still putting themselves and their boards in great peril. 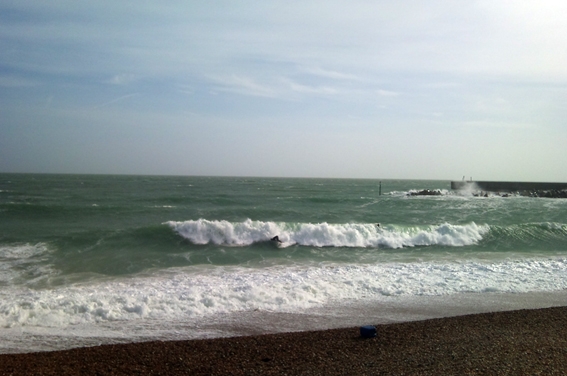 Anyway, by the time we had sauntered back to the cars, pulled on our 3/2s (god its nice to be in the summer suit) we reckoned that by the time we could get back down to new beach the tide could have dropped enough for the waves to break out a little further.
We hit the sea at about half five pm I guess after making the long walk into gusting gales, we checked the harbour but was not happening in there. At first we were dealing with magic disappearing waves, where monsters would rise and as you paddled and waited for the wave to whip you up in all of its rage, you just paddled and looked round and there was nothing there. Gradually, of course, the waves improved and improved and with the sun shining the waves started playing the game and giving us their clean shoulders to dance on.
The sea got quite busy, the sun shone, we bumped into Dan, had some lovely rides.
Left Carats car park 8pm, with a nice stoke.